Martin Krkosek | I am an Associate Professor and Canada Research Chair in Marine Epidemiology. My group works on population dynamics in the areas of conservation, disease, and fisheries via fieldwork, laboratory experiments, mathematical modeling, and statistical modeling. I run a long-term field program on salmon in British Columbia on salmon and their diseases in partnership with the Salmon Coast Field Station. We collaborate with Fisheries and Oceans Canada and several NGOs including the Pacific Salmon Foundation, the David Suzuki Foundation, the Wildlife Conservation Society, and the Sea Shepherd Society. I am an Associate Editor for Proceedings of the Royal Society of London B and co-Editor-in-Chief of the Canadian Journal of Fisheries and Aquatic Sciences.

Ariel Greiner | I am a PhD student cosupervised by Marie-Josee Fortin, Emily Darling, and MK studying the dynamics and conservation of coral reefs. I am interested in phase shifts between alternate stable states in coral reefs, connectivity among reefs, and how to incorporate those dynamics into spatial optimization models intended for conservation planning of networks of coral reefs.

Leila Krichel | I am a PhD student working with MK at the University of Toronto. I completed my undergraduate degree at UofT, where I carried out a project parameterizing parasite mortality and host-shedding rate for a Daphnia-parasite epidemiological model. My current project focuses on how environmental variability could affect host-parasite dynamics differently than what would be expected in a temporally constant environment. This work is being done using a combination of theoretical models and experimental epidemiology in a Daphnia-parasite system. 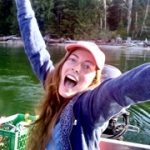 Madeline Jarvis-Cross | I’m a PhD student working with MK at the University of Toronto. I completed my undergraduate degree in 2018, with majors in Ecology & Evolutionary Biology, and English. I’m interested in using mathematical models to investigate the impacts of climate change on co-infection dynamics within and among hosts, and the impacts of environmentally-driven shifts at these scales on the structure and stability of ecological communities.

Jaime Grimm | I am a PhD student working with MK and Andrew Bateman at the University of Toronto. I’m broadly interested in aquatic conservation and developing evidence-based conservation policy. I’m currently working on characterizing the dispersal and distributions of fish pathogens originating from fish farms in coastal British Columbia through field research and environmental DNA analysis. Prior to beginning my PhD, I completed an MSc on invasion ecology at McGill University and worked as a researcher for the Wildlife Conservation Society Canada.
Alumni (Grad Students & Postdocs)

Kiran wadhawan (MSc on salmon and sea lice modeling). Now a PhD student in disease ecology and evolution at Edinburgh.

Sean Godwin (PhD on ecology of salmon and sea lice). Did a Liber Ero Postdoctoral Fellow at Dalhousie University and is moving to UC Davis as an Assistant Professor.

Andrew Bateman (Postdoc on salmon ecology, 2016). Did a Banting postdoc at UVic with Chris Darimont, and is now a research associate with the Pacific Salmon Foundation and Raincoast Conservation Foundation.

Stephanie Peacock (PhD on salmon and sea lice, 2016). Did a Banting Postdoc at U Calgary and now a research scientist with the Pacific Salmon Foundation.

Our Lab in the news

CBS and Scientific American: Devin Kirk on spiders trashing the nests of their lovers.

Vancouver Sun and G&M: Sean Godwin on sockeye and lice.